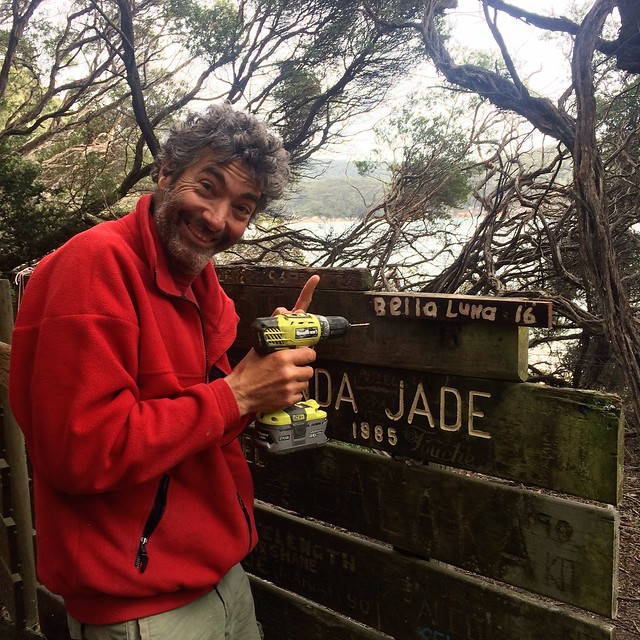 The Smalls and I then stayed on the beach while he hiked the trail we had already done – in order to get some exercise, headspace and weather updates. Daisy is a fart-faced GIT!!!! (Z just hijacked my keyboard, obv. ? ) They enjoyed doing their version of parkour on the rocks that line Cove Creek….

Weather updates were obtained and once we had lunch back at the boat, M and I began getting ready to leave in the early morning. I had great trepidation about what was to come. The sail to Refuge Cove had proved so difficult (“Really?” said M incredulously. I pointed out that I had spent chunks of time holding Z over the side and holding DB’s head over a sick bowl and then was steering in pitch black darkness with two far off lights flashing – purportedly to show us our way. “And you didn’t even throw up? You did WELL!.”)

This time I wanted to put the things I had learned into practice. There were three options – once out in Bass Strait, depending on the conditions, we would either;

a) sail to Deal Island

b) sail over to Port Welshpool

c) sail back to Refuge Cove

d) sail straight on through to George Town

The last option was the most intimidating – being probably at least a 20 hour journey. I decided to prepare for WCS (worst case scenario) and put lots of food in the cockpit for easy access, and everything else we might need within arms length inside the doors. My absolute priority? Not to go inside the cabin. Except to go to the toilet. DAMN YOU BODILY FUNCTIONS.

It’s so easy for M to whip out his manly length and point it over the side… Me? I have to take off the lifejacket, the coat, the bib and brace trousers before I can even reach my knickers. A travesty. And one I intend to somehow improve – it’s all an issue of easy access, versus sailing trousers designed by and for men. Gah.

M reassured me that the forecast was great for sailing to Deal Island (my preferred option). Eight to ten hours. We set our alarms for 6am.