Sleet during the night. Actual sleet. I am so grateful for the woollen blankets that Jess washed and dried for me ? Snugged up under one of them, I was warm as a bug. I thought briefly and unsympathetically of all the motorboating people over in their camp, shivering wetly, and slept in until eight o’clock.

I worked on our budget, listing Unavoidable Annual Expenses and breaking them down across 52 weeks. M mused over charts and weather. The sleet reappeared periodically, indispersed with chunks of windblown sunshine. The marvel of the morning was the FIRST EVER FISH.

M had left a line out the back of the boat, baited with a bit of kangaroo meat. A substantial flathead had chomped down upon that piece of national icon and become ensnared. It was easily a foot long. M hauled it in, DB looked up, Z burst into tears and ran, while I took a photo. Somewhere, David Honeybone twitched.

I explained to sad-Z that the meat we had eaten the night before had, as she knew, come from a cow that had been killed by somebody. The flathead we ate when we ordered fish and chips at the boatyard had been caught and killed by somebody. Catching and killing our very own flathead was a vast improvement on both those things – we knew that we had killed it quick, and that it would not go to waste. She perked up with the whispered suggestion of fish and chips for dinner…

She perked up even further when she caught a barracouta – which also became dinner.

M caught a shark – it was beautiful. Huge and dappled like a shady creek and I couldn’t bear for him to bring it in and cut its head off. He unwillingly let it swim free….
I am glad. 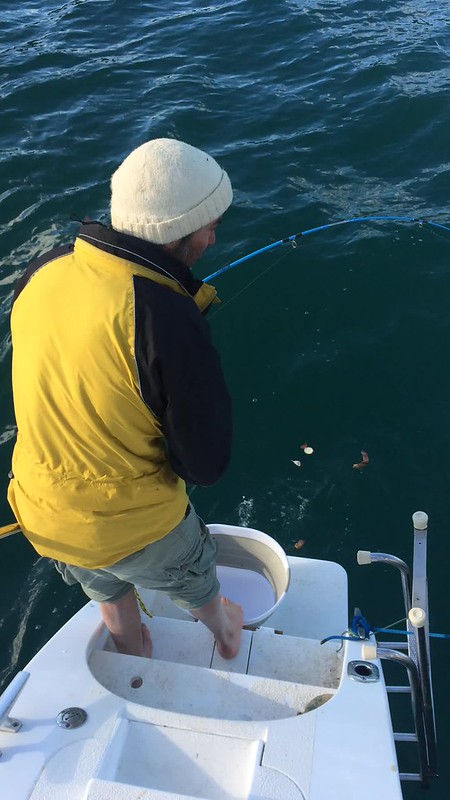